The major goal is to increase primate holding capacity for the P51 base grant.

BioBridge Global has been named one of two Prototype of the Year Award winners by the Medical Technology Enterprise Consortium (MTEC) for work done following a $7.8 million MTEC grant for the development of large-scale manufacturing capabilities for clinical-grade adult stem cells.

The award was presented at the MTEC Annual Meeting on March 4.

The objective of this proposal is to develop and characterize a novel Nanopore Microneedle Array that will enable cell transformation. Transformation will be enacted on 3D tissue volumes through cell electroporation and electrophoretic introduction of genetic material, causing a change in cell phenotype. In the proposal, the initial fabrication, testing, and proof-of-concept is described. Fabrication will be conducted at the Microelectronics Research Center on the J. J. Pickle Research Campus of the University of Texas at Austin.

Southwest Research Institute has received new funding from the Medical Technology Enterprise Consortium (MTEC) and the Food and Drug Administration (FDA) to use an SwRI-developed bioreactor to propagate cells for personalized regenerative medicine applications. A $3 million MTEC program will demonstrate stem cell manufacturing, and a $2.3 FDA contract is funding CAR T-cell production.

One of the most important goals of dentistry and the NIDCR/NIH is to generate a whole ?Bio-Tooth?. Dentin is a critical structural component of tooth. Although it has made great progress ofdentin development benefit for numerous hereditary syndromes and chromosomal anomalies,many gaps have been remained.

Development of new analytical assays which determine the potency of human mesnenchymal stromal cells and other cells utilized for cell therapies.

EAGER: Reprogramming to the Totipotent State

Intellectual Merit. The totipotent state exists during a brief period of embryonic development soon after fertilization before implantation. In contrast to pluripotent embryonic stem cells (ESCs) or reprogrammed iPSCs, which have the potential to generate all embryonic tissue types, totipotent cells can produce both embryonic and extraembryonic tissues. To date, the totipotent state can be achieved by natural fertilization, or artificially by somatic cell nuclear transfer (aka cloning) or removal of epigenetic regulators in iPSCs.

Genetic testing has greatly advanced diagnosis of early onset epilepsy. In spite of the expanding number of monogenetic disorders, such as epilepsy in patients with Aristaless-related homeobox gene (ARX) mutations, many of these rare diseases do not have a validated experimental model and thus suffer from limited understanding of the mechanisms of brain development and epileptogenesis. ARX is a transcription factor which is widely expressed in the developing and adult brain, skeletal muscle, pancreas, and testes. 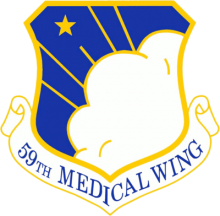 The 59th Medical Wing at the Wilford Hall Ambulatory Surgical Center (WHASC) provides support for research conducted by investigators and their collaborators addressing the unique scientific needs of the Air Force, the Department of Defense and the Nation.